Delving into the Gull JuJu Archives…

Here on the Island, we’ve noticed that the Western Gulls have a particularly unique and fascinating taste for edible-looking things and nest decorations. When walking through gull territories, one will often notice a collection of rib bones, regurgitated bits of plastic trash and other such goodies, brought back lovingly from the mainland, some 30 miles away.

Over the years, we’ve collected our favorite findings and stowed them away into the Gull JuJu Archives. Here is a peek into the various juju tastes…. 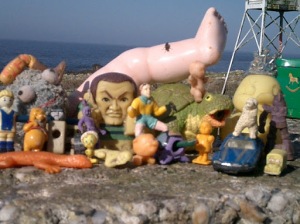 By far, the most common juju items found are decrepit plastic figures. A variety of army men, Winnie-the-Poohs, Lego characters, rubber duckies and many more have found their way into gull’s bills and stomachs. Two of our particular favorites are the Beanie Baby fish with bulging eyes (top left) and the slightly terrifying plastic baby doll leg. 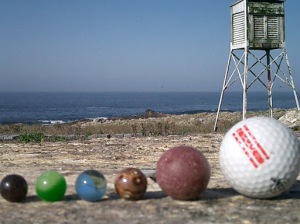 Gulls seem to display an affinity for small round things as well, in addition to particularly colorful items such as cocktail picks. The distances that gull juju travel also differ. On the left are pinniped tags from Antarctica, along with bits of sealion fur, and a mermaid pouch likely from a nearby beach. 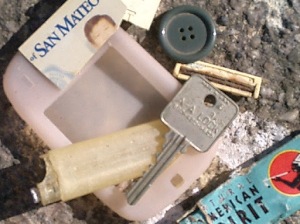 Remember thinking that cutting up your credit cards and disposing of them in the trash will make them safely disappear forever? Wrong. Pocket contents are also a gull favorite, be it your keys, rolling papers or iPod slips. We find it all here.

Unfortunately, the odd fishing hooks, lures and squid lights are also found. Although the birds who brought them onto the island avoided the potentially fatal repercussions of these objects, many birds often don’t. Due to poor by-catch monitoring, little is known about how many seabirds are entangled in fishing nets and hooks every year, and what the impacts are on their populations. However, while these lucky birds evaded death, many with similar tastes do not. 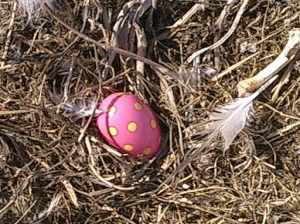 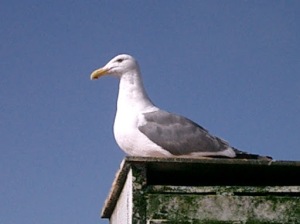 And last, but certainly not least, the oddball egg is a rare find. Is this proof of a mysterious 14th breeding species, or merely just a
nother bit of Western Gull JuJu?