Living on a remote island wildlife refuge is a wonderful experience for the biologists and research assistants of PRBO. However, all food and personnel must come and go via boat, and the ocean is so rough at SEFI that no boat docks exist. Our main facility for getting things and people on and off the island for the last 40 years has been East Landing, which has a large, electric-powered crane that puts our SAFE boat skiff in the water.  The SAFE boat then meets with the supply vessel and transfers material.  The crane then lifts the skiff and supplies back up to the boat deck 30 feet above the sea.

A railroad cart that runs from the landing, past the powerhouse and ends at the SEFI house makes moving huge loads of supplies, generators, and fuel easy. This landing site has been used since the first human inhabitants of SEFI came to harvest skins and eggs because it lies in the protected lee of the island, sheltered from the prevailing winds and currents from the northwest. The latest incarnation of the East Landing crane was built in 1989 by Sheedy Drayage. 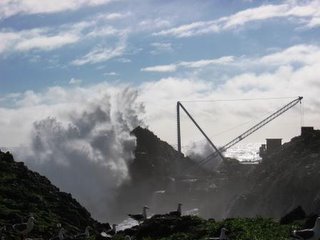 As is inevitable for machinery operating in an oceanic environment, the crane has suffered corrosion and decay and was suddenly condemned a few months ago. Since that time, we have been using our secondary landing on the north side of the island in Fisherman’s Bay.  North Landing has a hand-powered crane to raise and lower our Zodiac (a small, inflatable boat).  Gear and supplies are transferred between the Zodiac and shore at a sea-level platform on the rocks. Large swells can (and often do) suddenly roll in, scouring the cove with roiling whitewater and tossing the Zodiac around like a cheap beach ball at a Phish concert.  We then hump our supplies around the island in wheelbarrows. 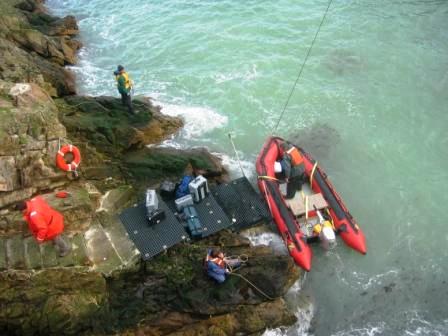 North Landing Zodiac at the steps where gear is unloaded.

We’ve begun the two week-long operation to dismantle the East Landing crane and remove it to the mainland for reconditioning and repair.  Using HH-60 Pavehawk helicopters, our friends at the 129th Rescue Wing of the California Air National Guard at Moffett Field airlifted giant toolboxes loaded with the specialized, heavy-duty tools and equipment needed to work on the crane.  Local 377 ironworkers from Sheedy Drayage tore down the crane over two days and prepared the parts for transport.  Aris Helicopters then lifted each part of the crane and moved them to the helicopter pad, except for the boom, which was immediately flown to the mainland.

East Landing crane just before Sheedy and Aris pulled all the pieces and placed them on the helo pad.

One of the crew from Sheedy was Al Pietrocelli, who worked on the original installation of the big blue crane 20 years ago. Al was happy the dismantling went smoothly and thought the damage was not too extensive. Hopefully we’ll soon have East Landing back in operation, and the much more physically taxing North Landing will revert to its back-up role as a storm landing.

In a related (and nearly as important) story, early December bore brutishly down upon the island with a nasty cold snap. Not big news, except that our (in)famous Webasto boiler has been out of commission since April.  We are wildlife biologists, who think of ourselves as a hardy species used to extreme weather, difficult geography, and of course, wild animals.  But we were reduced to shivering, quavering wimps.

A handy-crafty species as well, the biologists out here at SEFI have been able to keep the Webasto (designed to heat the cabs and engines of semi trucks, buses and boats) going well past its service life.  This time, however, the diagnosis was terminal.  Its shiny new replacement is currently purring away under the back stairs, pumping hot water through the radiators, and happiness once again reigns at SEFI.

After two weeks, we barely remember the old one.